Finally a day where the kritter kins can partake in some much needed deck snoozing!! 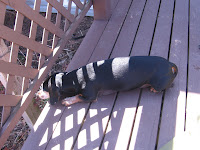 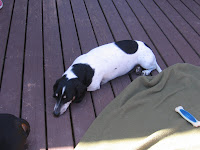 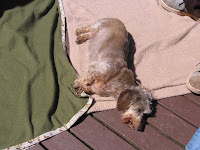 First construction phase of the year - the privacy walls around the pool! The melted snow has left the pool 3/4 filled with water. It will be a few weeks before the it is opened & in operation-but it is wonderful to finally be able to get outside & get some work done! It was a loooong winter! 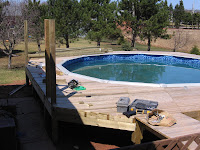 Please click on the link below & bid, bid, bid! Helping Homeless Pets is comprised of a wonderful volunteers who assist various rescue groups (and one way is by raising money)!

They have a wonderful assortment of items up for bid (and the winner can have the item(s) mailed to them)!

Oskar underwent his annual veterinary exam today & while he was extremely anxious during his visit, all went well & he was given a clean bill of health. He will have his teeth checked again in the fall, but until then he is in the clear!

And for being such a good boy, he was rewarded with a Tim Bit at Tim Hortens drive-thru!
Posted by Charlotte at 6:12 PM 4 comments:

What's a guy gotta do to enjoy some sun? Lay on the window ledge, perhaps. 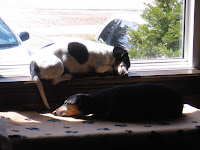 Xena prefers to stretch out in the soft comfort of the doggy pillow! 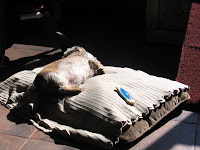 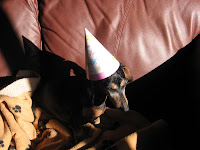 We spent an enjoyable long Easter weekend visiting our Nani & Grampie!
But before we left - we had to undergo the dreaded spring cleaning!


First, we had to get our teefies brushed! 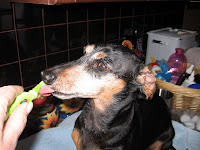 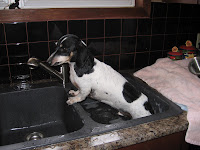 Then suffer through sudsy baths! 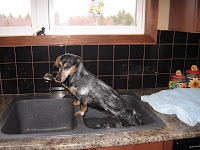 Xena was forced to undergo such abuse the night before - seems she had a "little" mishap in her crate - but that is another story! Thankfully, Dad was there to give her a much needed bubble tubby! 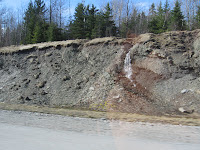 Some interesting pictures along the way!! 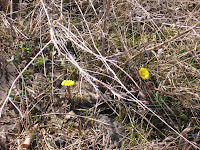 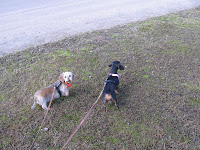 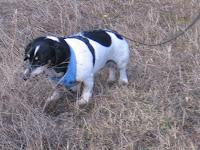 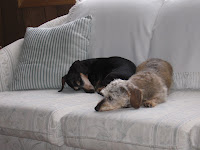 This Can't be Comfortable 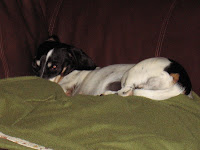 The Robins are Back!!! 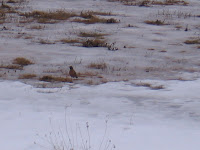 And one of two foxes seen behind our house! 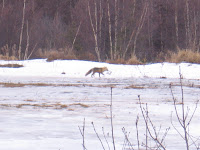 Otherwise, affectionately known as "Oskar". This is just a peek into why & how we deal with our sometimes "problem child". 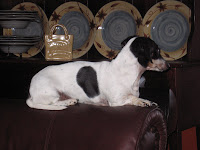 Okay, I just heard a dozen awwwwwwww's - but don't let that cute little face fool you - he is a force to be reckoned with! But, truthfully - I ask you - how could anyone turn that face down? So, here-in lies the story of "Oskar".

Oskar was surrendered into rescue at the ripe old age of 2! For reasons we will get into shortly, his previous "owners" took him to their vet & asked that he be murdered. Murdered? A healthy, barely out of puppyhood, sweet-faced, little spotted dog? How or why would anyone murder him (and yes - I call it murder - "put to sleep" or "euthanized" - sounds so gentle and forgiving - well it isn't.) To kill a perfectly healthy, exhuberant animal is murder. But on to the real story........

Rather than kill him - he was surrendered into a wonderful rescue organization - Almost Home Dachshund Rescue (and we thank dawg for that). The moment I saw that sweet, furry, cherub face - my heart cracked. His foster Mom, Sandy and I corresponded back & forth and ultimately Oskar was on his way from New Hampshire in a few weeks time! He would be a wonderful companion for our 1 yr. old blk and tan, Schatzi (who's origins shall for ever remain a secret - let's just say - she is in the "witness protection program" and leave it at that).

We welcomed Oskar into our lives very blind sighted. We knew he had "issues" in his former home - but, pfftt - how bad could they be? After all, that "sweet, cherub" spotted face showed no cause for concern? Right?

So naive were we! So un-prepared were we for the months ahead! You see, in his former home when sweet, cherub, spotted faced Oskar (who was not named Oskar at that time) began to test his boundaries and "get above his raising" - by putting his mouth and teeth on the humans in his house - they thought it was cute! After all - he's just a cute little pet store puppy! By the time this cute little, spotted, pet store puppy had bitten a child in the home - he wasn't looking so cute any more!

So, as the story goes - the former owners decided to send Oskar off to "obedience" with a "professional trainor". Oh, did I forget to mention, this "professional trainor", in his bag of tricks used a remote controlled shock collar as his proven method of training? *thud* To this day - Oskar is terrified of the cordless phone!

So, by the time this cute, little, cherub faced spotted dog got to me, he was now an angry, fearful, screwed up little boy! It took less than 24 hours home to see the real Dr. Jeckyl and Mr. Hyde! Wow! We were unprepared for what we were dealing with. Oskar (all 13 lbs of him) was to be the "man in charge" and all other beings were inferior. What? You want to sit on "his" couch? Not a chance, lady! Hubby happened to be holding Oskar when I walked into the room - and within seconds - Oskar was snarling, teeth exposed, hackles raised informing me that I had no right to do so. I was on his "turf".

So, now we have a problem! And we would come to fully understand the extent of his "issues" in the next coming weeks and I quickly learned how inadequate we were to deal with them. My first thought was, "What to do?". Being a novice dog owner - I was unprepared and inexperienced with anything like this - but I was willing to give it my all!

I quickly enrolled Oskar in obedience training - as I quickly learned how un-socialized he was with people, other dogs, noises and sounds. Oh, and the constant barking. Since it was early spring & the windows were open - he would bark his spots off if a snail farted underwater somewhere! Nothing was familiar to him - sounds, sights, or noises. He hated obedience classes and failed miserably - but we went faithfully every week.

I contacted his foster Mom in tears after one incident, (when he bit my daughter AND a guest in our home.) How on earth could I possibly deal with this dog? We had many family talks at the dinner table and sending him back was not an option. We knew we would be this dog's only hope, if he was to have one.

NILIF - Nothing in Life is Free

Sandy, Oskar's former foster Mom put us on to this method of training. And it literally saved his life and taught me much in dealing with a fear aggressive, dominant dog. For those of you who aren't familiar with this training - it isn't rocket science. Matter of fact - it is so simple - don't know why I didn't come up with it! Your dog basically has to "work" for anything he or she wants! It teaches them that YOU control the resources - whether it's food, water, toys, treats, affection, walks - whatever - it all comes from YOU. No "free range" feeding is allowed - (the bowl or floor doesn't supply the food - YOU do). Meal times are at specific times - fed by you and/or family members.

So, begins the daily routine for the rest of our lives. By "working" - I mean Oskar has to do something in order to get what he wants. Simple, really. He wants his breakfast - bum has to be sitting on the floor before the bowl goes down. He wants to go out for a pee - gotta sit to get the harness on. (or go into the down position - which is a tough pill for him to swallow - dominant dogs don't like to do "down").

In the early stages, since both daughter and I were leary of Oskar, he bonded with hubby, Ron. Which is fine, but now that created another problem. He felt he had to "guard" Ron - not allow anyone to sit with him or come near him. So, lesson #2 began. Stick with me - it gets real "touchy-feely" here. I swear to God I'm not making this stuff up - we really had to do this.

Ron had to show Oskar that he (Ron) chose me - over him!! (I thought he did that at our wedding ceremony!) And by doing that - we (Ron and I) would sit on the loveseat or sofa and touch each other (okay - no snickering - this is not X rated!) Many times Oskar would try to jump up and wiggle in between us! But each time he did, he was set on the floor. After a few days, Oskar was "invited" up to join us - but he had to remain off to the side - and yep -we're still in the "touchy-feely" stage. But - it taught Oskar that I was #1 with Ron and it's still in place today. Refresher courses are taught, as required.

Also - no sleeping in the human bed! A huge no-no for a dog with dominance issues. Now that Oskar is a bit better with this - we do allow him in for brief spurts - but only because he has "earned" the right to be there.

After 5 years of continuous training and working with him - we have him as good as he's ever going to get. Is he 100%? Nah, not even close. He can be a turd, but he 's our turd. We avoid putting him into situations where we think he will react negatively. But in our home, he and I have a mutual understanding and respect for each other. What's mine is mine and what's his - is negotiable!
Posted by Charlotte at 5:38 PM 7 comments:

Oskar is in the doghouse, (so to speak) after an act of aggression on the weekend. He was sitting with his Dad, when I got too close & he lunged at me-teeth bared & snarling.

He was corrected, for the remainder of the evening - he took the long way around me! Today, we move on.

Such is life, with a re-active spotty pie-bald dog.
Posted by Charlotte at 10:13 AM 3 comments: 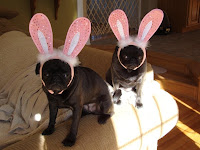 No, it's our puglet friends, Gabby and Libby!!
Posted by Charlotte at 6:41 PM 4 comments:

Momma Got Some Tats! 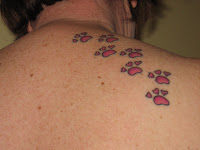 Ankle - the dachshund was done a couple of years ago, the heart & scroll is new! 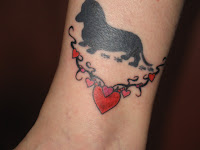 Any signs of spring yet?
Posted by Charlotte at 11:17 AM 3 comments:

My Name is Liesel! 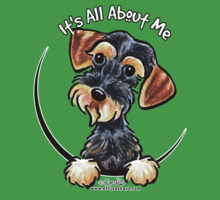